Monkey Blood Design, the creators of the Midderlands setting and other fine BOSR adventures, are having a bit of an end-of-year blowout on Drivethrurpg.com until 7th January. 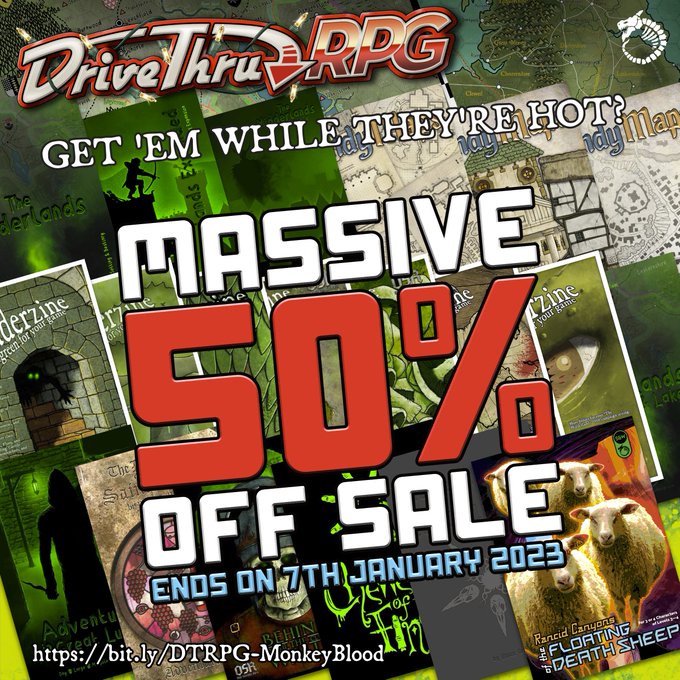 Now live on Kickstarter, for just over two weeks, is Glynns Seal’s OSR take on Fighter subclasses for his Midderlands/Haven Isles setting

Glynn Seal has teamed up with Necromancer games to produce a big book 5th Editon of his fantastic Midderlands setting book. On Kickstarter until April 2nd. 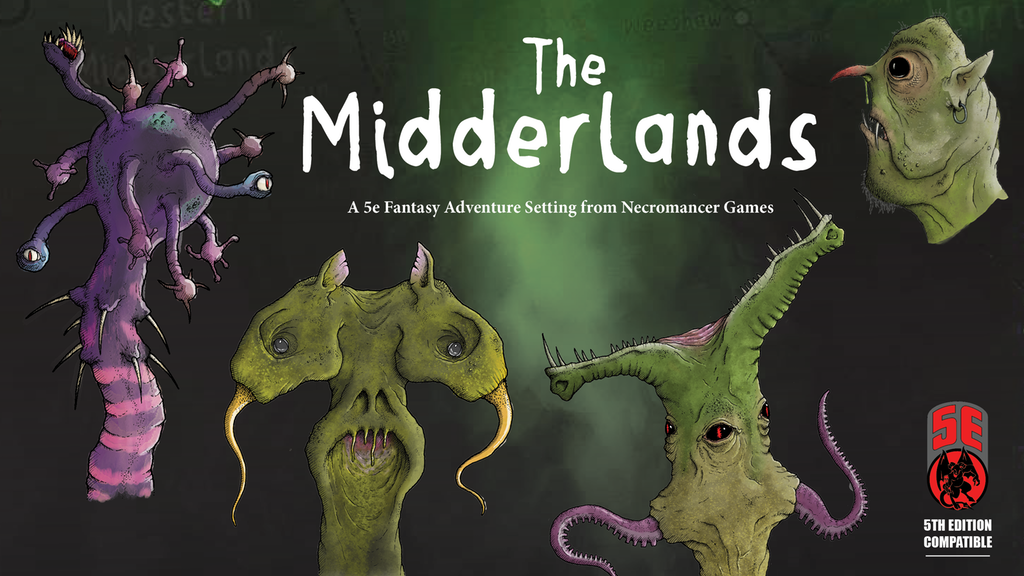 The Tales of the Sorcerer Under the Mountain launches tomorrow, you can read more about this OSR Rulebook + 5th Edition adventure in this previous post.

A couple of weeks ago I got the map for the adventure from the uber-talented Glynn Seal of Monkey Blood Design fame. There’s a reason why he’s an award-wining cartographer 🙂 Rejoice fellow OSRians, Glynn Seal’s (aka Monkey Blood Design) The Midderlands, as previously Kickstarted and supported by this here blog, has been released;

As a stretch goal for the Kickstarter I promised a Crypts & Things Conversion Guide, so you could use the Midderlands (which uses Swords and Wizardry as its base) without much fuss with C&T.

I’ve just finished the conversion guide, which is on its way for proofing/checking before a quick layout and release as a freebie via DriveThruRpg.com and the D101 Webstore, which I anticipate will be sometime next week.

In the meantime, he’s a quick excerpt from the C&T Conversion Guide.

Gloomium is everywhere in the Midderlands. It seeps up from the Middergloom, an ambiguous underworld below the Midderlands. It is toxic and corrupting. It is green in colour and is the source of much strangeness, corruption and twisted magic. This section explains how gloomium works in the context of Crypts & Things magic system.

As a Source of Khaos

Crypt Keepers should assume that the seepage of gloomium is the source of Khaos monsters and mutations, for games set in The Midderlands.

Whilst in the Midderlands, use the Gloom-touched rules (Midderlands page 10 and 11), instead of the standard Crypts and Things Corruption table on page 64 of Crypts & Things.

Green is the Brightest Colour of Magic!

While in the Midderlands there is only two colours of magic; Green and Colourless.

Green is the magic of gloomium; it’s harmful, toxic and glows a malignant shade of luminous green when cast. It causes corruption when cast, using the rules on page 84 of Crypts & Things. All the spells on the Black Magic spell lists (see page 50 of Crypts & Things) are Green.

In addition, the following new spells from the Midderlands are Green Magic spells:

Colourless magic is everything else (i.e. Spells from the Grey and White Lists). It does not have a colour when cast and its effects are usually boringly beneficial or utilitarian in nature.

What Did That Do? (see Midderlands page 74) is a colourless spell.

While in the Midderlands ignore The Summons of Evil rules for casting beneficial (white) magic.

Also, ignore the rules for Blood Magic (unless you are using The Others from Crypts and Things or a similar body of Demonic beings who provide magic for blood sacrifice).

Gloomium is green-hot, radioactive stuff as far as a Sorcerer’s magic sensitivity ability (see page 23 of Crypts & Things) is concerned. It drives many Sorcerers ‘up to the wall’, with the constant throbbing of the temples when their magic sense is triggered by a pool of the green stuff in some swamp, or from a creeping feeling of unease because the house they are lodging in is built over a large gloomium deposit. This does have the benefit of sorcerors being great at finding gloomium.

Since gloomium is nasty raw magical stuff, sorcerer’s may regain magic by ingesting it. This is a particularly dangerous and insane practice which is not recommended by the Royal College.

The procedure is thus:

For each ‘gulp’ of gloomium, a sorcerer regains one level of cast spell and loses 1d6 hit points, from the toxic and corrosive nature of the substance, and upon a failed Sanity Roll loses 1d6 sanity points.  It takes one combat round to take a gulp. They also glow bright glowing green for the number of gulps you took in days. All these effects add to each other, so for example, if you take four gulps you take 4d6 hit points of damage and potentially lose 4d6 Sanity if you fail your Sanity Test and you can remember up to a fourth Level spell or any combination of spells whose levels.

For example, Ned the Anxious, a rather foolish apprentice of the Royal College, finds himself in a spot of bother in Cairn Chase Forest. About to be skinned alive by some rather Unmerry Men, and out of spells, he decides to take two gulps of gloomium, from a readily-prepared flask of the substance. This takes him two rounds, during which time the Unmerry Men close on him and fire off bows. In round three, the gloomium kicks off. He takes 2d6 Hit Points damage, rolling a four and a five for nine points of damage, and successfully makes his sanity roll – so keeps hold of his mind. With his innards burning from the liquid, he rememorizes the 2nd Level Spell Web and wastes no time in firing off a sticky web of green stuff at the Unmerry Men. If he had not been so worried, he could have taken his time firing off one Magic Missile this round, and another the round after (two first level spells equalling 2 levels of spells remembered as allowed by two glups). If he survives, he will glow bright luminous green for the next 1d10 days, making sneaking about and hiding very difficult and becoming a magnet for any nearby witch hunter.