This is my personal take.

Even though I’m the author of OpenQuest, which being one of D101’s main gaming lines takes up a lot of my energy (writing, developing and promoting), I like to play different styles of D100 Fantasy gaming

RuneQuest is the grand-old standard of D100 gaming. It’s where D100 has its start.  RuneQuest 2 (now sold as RuneQuest Classic) is my white box.  The new version RuneQuest Glorantha is an updated version of RQ2, with new rules, Such as characters now have their own Runic associations, which provide the basis of their magic, and Passions that reflect their relationships with their communities and their enemies. It’s a perfect match for Glorantha, not only for nostalgia reasons but because it’s been designed for it. But it does come at the cost that some of its systems are a bit clunky and a bit old school that sometimes you question whether or not you should just house rule the damn thing. Strike Ranks come to mind directly. But as a long time Gloranthan fan since the 80s, it is lovely to have an edition of the game which is easy to share with the players, both in terms of presentation, playability and clarity of setting.

Mythras on the other hand is the slick generic system I would have died for during my early RQ 3 period, when I was making up my own settings, in the late 80s. Now it’s here, it’s no surprise that with a complete all in one rulebook – sans setting and adventure – its spawned a series of setting books, some of which move outside the genre of Mythic Fantasy, and with the release of Lyonesse last year, its own standalone games. I need to get more hours in running Mythrasm get my own Isle of Death adventure/setting book out there and a series of blog posts about the various supplements that are available for the game is in order.

OpenQuest is my take on Fantasy D100 gaming, pairing down the subsystems to an almost minimalist “one roll then meaningful effect”. I was a big fan of the all in one rulebooks that Games Workshop released Call of Cthulhu and Stormbringer as in the 80s – effectively they were the main rules + the companion set, that were boxsets in those days collated into one book, with new art and colour plates.  Stormbringer is my Swords and Sorcery gold standard and in many ways my favourite BRP game, but not one I’d play on a regular basis because I think it’s not balanced in any way shape or form 😀  So OQ is a tribute to that format, in so far that the printed version had a section of colour plates. Its also allowed me to explore and give structure to the rather rambling campaign structure of other D100 games, something as a fan of Basic/Expert/Companion/Immortal D&D which had a very clear view of where the characters were heading has annoyed me previously.  Since OpenQuest is close to my heart, I ramble on about it on its own blog on openquestrpg.com.

Skypirates of the Floating Realms, IS the minimalist D100 game that I’ve designed from bottom-up, keeping only the rules that are completely necessary for this rather light-hearted (think post-Monty Python films, Jabberwocky, Time Bandits etc) fantasy game. It’s always a nagging thought in my mind when I play other D100 systems, that my GMing brain is overburdened by subsystems and magic effects that I simply do not need. If you are familiar with the Black Hack (which is d20 fantasy-based), this is my attempt to downsize d100 into a short 6 x 9 format book. I’ve been playtesting it since spring of 2021 and our party of Argyll the Dwarf and Boris the Bear, Priest of and I’m aiming to get the game out to crowdfunding later this year.

The fifth flavour which I often forget – because I’ve not played it since the late 80s – yet has an immense effect on me are Gamesworkshop’s Warhammer RPGs of the 80s. This is basically Warhammer Fantasy Roleplay 1st, which is the ultimate doorstop of complete RPG, and their Judge Dredd RPG, which is very much Warhammer lite. Broadly speaking both games have percentile skills as characteristics and talents which add bonuses to skill rolls, or allow you to do new things with a skill. Warhammer Fantasy complicates matters with a career system, which sees sewer-rat zeros progress to high-level heroes. Although I never got to the high-level characters, I suspect they play more like AD&D 1st characters, where low-level characters are charmingly scummy and more akin to Call of Cthulhu characters. One of the writers of the Enemy Within Campaign said as much, saying that his direction on the early parts of the campaign was effectively along the lines of go write D&D adventures mixed with Call of Cthulhu.  As much as I liked the Old World setting, it vibed off familiar British Grimdark sensibilities and played a good chunk of the highly impressive Enemy Within Campaign. Like Warhammer FRP, GW Judge Dredd comes with an immersive world which the rules support fully, the crazy post-apocalyptic near-future sci-fi of 2000 AD comic’s most popular character. It has a much simpler character structure, effectively it has four career types (Street, Tech, Med, Psi Judges) which you stay within for the entire course of your game, but where it jumps into the deep end is a complex Action Point system for Combat. It looks good on paper but fails apart as a solution to everything in play. I had a recent re-read of GW Judge Dredd, and actually remembered that it was my first d100 game, before even Call of Cthulu and RuneQuest!

Chaosium (publishers of Call of Cthulu, RuneQuest, 7th Sea etc) are having a warehouse clearance sale, with items being 15% to 66% off.

Alone Against the Flames, A solo Call of Cthulhu adventure. Learn how to play CoC 7th edition for the price of a coffee. SOLD!

HP Lovecraft’s Dunwich  A Call of Cthulhu Sandbox, with a couple of supporting adventures. I had this in the 90s and foolishly let it go, but by gum, its mine again at a bargain price

RuneQuest Classic. A cleaned-up version of RuneQuest 2, without losing the original’s essential charm, with about 22 extra pages from magazines from the period, in a robust hardback. This is my Whitebox.

Borderlands and Beyond. Want a starting campaign for RQ? This is it. This is a collected edition, Borderlands + 2 other supplements integrated with new art from fan favourites. I had the pleasure of buying from Rick Meints, the publisher, at a convention in the 2000s.

13th Age Glorantha. Want to get into Glorantha, but overwhelmed by RQ and have a group that is more into D&D? This is your way of getting your Glorantha fix. Also worth getting if you are an old hand since it positively purrs in play 🙂

Khan of Khans. The easy to play card game intro to Glorantha. I played this with our H when he was around eight, he came away wanting to know more about Glorantha. Result! 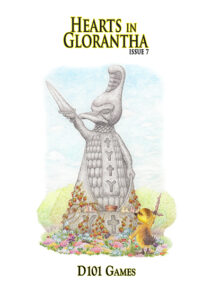 ‘ve been shouting this one from the virtual rooftops for a good two weeks over on various Gloratha groups. However, just in case you are a Glorantha fan or Glorantha-currious, I’m ceasing my publication of my two Gloranthan fanzines at the end of this month. Which at the time of writing is just over a day and a half.

So if you want to pick up Hearts in Glorantha/Gloranthan Adventures, its on sale via my website (free postage for UK customers)

Or if you prefer drivethrurpg.com, its all there too. t on getting a copy of Grogzilla at Grogmeet 2019?

As well as articles for OpenQuest and Crypts and Things, it also has a sequel to the Road to Hell in the form of Wigan Pigs an adventure for OSR games. Also making their debut in Grogzilla are the Six Traveller culture for Mythras, which is a short taste of things to come in the new year.

As far as Old School settings go you can’t get more Old School than Glorantha.  If you are a fan of old RuneQuest or merely just curious, I recommend you check out this system-less Gazetteer/Atlas.

I’ll be wittering on about it over on my Hearts in Glorantha blog,so pop over there if you want more detail.