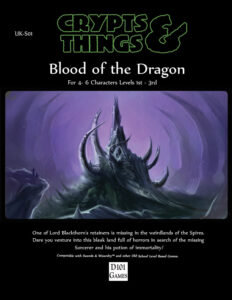 As part of our Dark November sale, I’ve re-released my long-unavailable adventure for Crypts and Things, Blood of the Dragon, for free in pdf format.

It’s available until the end of the month, then it won’t be available again until the adventure/setting book Under Dark Spires, of which it will be part,  is released in early 2021.

The first adventure module for Crypts and Things, intended as an introduction to the game. Compatible with other Old School Class/Level based games based on the Worlds Favourite Fantasy Role-Playing Game in its 70s/80s incarnation.

“Under a land shrouded in volcanic ash punctuated by rocky spires that tear at the sky they say the Great Dragon sleeps. Tyanos the Black, Trickster god of the long-dead Hu-Pi people stole their blood and bottled it for his insane delight. As the drink of the gods, it confers immortality to mortal man, but at what terrible price? The very quest for this elixir is insane. A trip into a harsh and unforgiving land of the Spires, a poor and bandit ridden weird land, inhabited by the likes of Black Joop, Nigus the Headless and the Mother of Hydra. Names that should send a shiver down your spine. So pick up your sword, down the last of your ale to steady any nerves and stride off towards a great adventure amongst the rocks that defy the sky.”

What this Module contains

Blood of the Dragon is a short introductory adventure set in the ancient and ruined lands of The Spires.

We don’t do this Black Friday or Cyber Monday nonsense here at D101 Games, but we do Dark November, a celebration of all our wonderful British Old School Renaissance titles.

Until 30th November we are having a sale where the following titles are discounted from 50%-10% off. P&P to UK addresses is free on orders over £10.

Dark November continues over at openquestrpg.com, with a post about my recent game set in the Savage North, entitled Until the Fearless Come.

This is part of a trilogy of adventures collectively called The Rites of Passage, that have played out at various online events over this year, and will be published next year in The Saga of the Savage North an adventure/setting book for OpenQuest 3rd Edition. 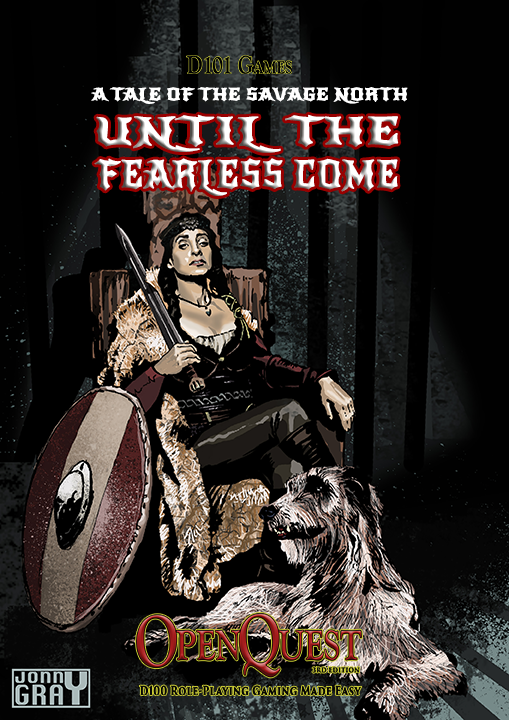 Skyraiders of The Floating Realms is our pulpy hi-action fantasy game of Sky Pirates flying between floating chunks of rock looking for loot and adventure. In-play it’s light-hearted evoking the feel and tone of old Holywood Pirate films such as The Crimson Pirate, and the more recent Pirates of the Caribbean. Not really a candidate for Dark November and its horrors, I initially thought.  That was until I started thinking about the enemy of all the light and jollity in the Floating Realms, the sinister force that animates the dead, whispers in villains minds driving them to evil – The Darkness.

What Can You Tell Me About The Darkness?

There follows a transcript of questions and answer session given by Professor Verda Goodhope, a renowned Dark-Hunter to a gathering of apprentices in the basement of the Lieg Institute in Black Dog Isle.

What is the Darkness?

In short, it is the enemy of every living thing in the Floating Realms.

It has always been the hidden evil in people’s hearts. The dark desires that they keep far away from others, away from their loved ones. Perhaps those in power, or think mistakenly they have power, who think they can act out desires without recrimination, will act to them.

It can influence people’s actions and manifest physically as demons.

How did the Darkness cause the Shattering?

In the Ancient Times before the Shattering, the hidden dark desires became too much in the teaming cities of that time. There was no release, and people lived their lives in denial without confronting their inner demons. I’ve found evidence in the old ruins that they were encouraged by the religions and philosophies of the day, to repress such desires for the good of civilisation.

A group of magicians who we call Sorcerers emerged in the Ancient Civilisation. They initially hid in plain sight as healers who specialised and the drawing out people’s suppressed desires, freeing them of their pain. All the while, they took the Darkness that they captured to bind to themselves as magical servants.

Somewhere along the line, due to the Sorcerers meddling, The Darkness itself became an entity, self-aware and malignant.

It escaped the inner world and shattered the psychical world into a multitude of pieces, which exist today as the Floating Realms. Civilisations fell into the abyss, and Darkness demons rampaged. The sun of Ancient Times was extinguished, and the world lay in Darkness.

How was the Darkness banished?

We’re not entirely sure. The world was in ruins, the survivors starved of hope when suddenly, a New Sun arose in the skies. A horde of avenging angels flew out of this New Sun and purged the Darkness Demons from the Floating Realms.

Where is the Darkness now?

The onslaught of the Angels of the New Dawn greatly diminished the Darkness from the world but did not eliminate it. It still exists in hidden places in the world. In the black hearts of villains. As Darkness Demons, who stalk the Floating Realms looking for victims. It still corrupts people and turns their actions to evil.

Sky Raiders of the Floating Realms is currently in development for release in 2021. Zero Editoin with a playable set of rules and the barebones of the setting is available from the D101 Games web store. 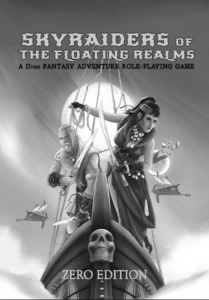 So I missed out on doing anything for Halloween because I was preoccupied with the end of my Gloranthan Fanzines, and before that, in Sept/Oct I was in full pimp mode for the OpenQuest Kickstarter which kind of blew up in my face.

So It occurred to me that my Dark Fantasy OSR/D&D stuff is not getting the love it deserves. So I’ve decided to run a month of promotions/competitions/new-releases for the Crypts and Things, the soon to be released Swords Against the Shroud as well as other OSR bits I do is in order.  This is what I call…

Oh, and It has a logo, that uses the most British Old School of fonts (Moria Citadel) 🙂

First Dark November competition is to get more minions…oops sorry followers over on D101 Twitter Account. When we reach 500 followers, I will do a prize draw for one of D101’s OSR/D&D titles in print.