Two years ago Lawrence Whitaker from the Design Mechanism announced the Lyonesse RPG based upon the series of books by Jack Vance of the same name, using a modified Myrthas as its base.

They are now getting close to release, and Lawrence posted this picture of the print proof on their company Facebook page last Friday. ` 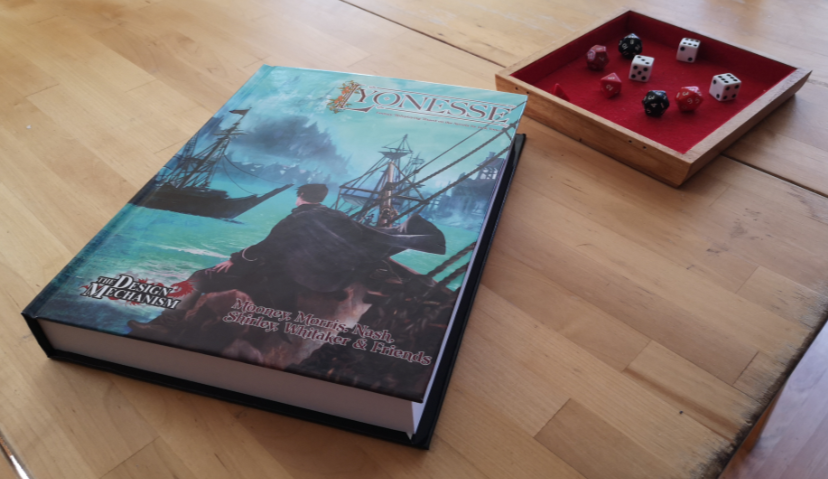 Yesterday Lawrence Whitaker announced a new licensed Lyonnese Roleplaying game, which while being self-contained will use the Mythras system, based on Jack Vance’s novels:

We are delighted to announce the Lyonesse roleplaying game.

Jack Vance’s high fantasy masterpiece, Lyonesse, is to be brought to life in a new roleplaying game by The Design Mechanism. Licensed and approved by Spatterlight Press, Lyonesse is a standalone game based on the acclaimed Mythras system. The Lyonesse trilogy – Suldrun’s Garden, The Green Pearl, and Madouc – tells the story of the Elder Isles, and the ambitions of King Casmir of Lyonesse to bring its fractious kingdoms under his sole rule. Casmir is opposed by Aillas of Troicinet, the lover of Casmir’s daughter, Suldrun, and father of Dhrun, a child raised among the fairies of Thripsey Shee and destined to sit on the throne Evandig, which King Casmir believes to be his own destiny.

Its early days in development, a 2019/2020 release date has been noted in comments by Lawrence, but the artists have been announced in the full press release, and the following teaser image was released with tannouncementent: