And so it begins, our run through Under Dark Spires, my mini-campaign for Crypts and Things starting with 1st level characters. 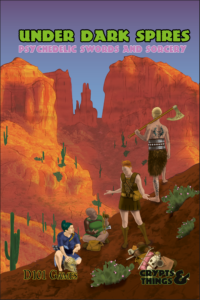 It’s been a while since I’ve played C&T and an eternity since I’ve run an ongoing campaign of it. In between, I’ve been on a steady diet of D100 games (OpenQuest mainly) and new modern D&D variants like 5th Ed and 13th Age. So it was a shock at first going back to C&T’s very old school OD&D base + tweaks from 80s White Dwarf/Fighting fantasy. Any doubts that I would not enjoy this style of play anymore were quickly dispelled. The players are certainly very enthusiastic about playing it 🙂 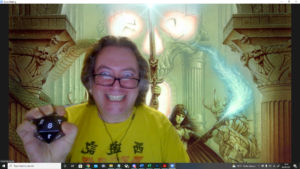 The Crypt Keeper awaits you in the Room of Zoom!

I explained a bit about the dying world of Zarth, the demonic Others who have come to feed. We discussed that it has elements that require maturity due to themes of violence and oppression and the safety tools we would use if the game moved outside of what people were comfortable with.

The immediate set-up is that the characters are 1st Level and are many treasure hunters who have gone to a region called the Ash Plains. Where the Gods buried an Empire under volcanic debris for their hubris hundreds of years ago, hence in places, you can literally trip over the treasure that was left behind (or so they say).

We did character generation pretty much as written in the rulebook, the exception being that we used 3d6, rerolling 1s and 2s, which leads to more heroic characters. Part of me thinks I should make this the default for Crypts and Things.

We’ve also had another player, Jason, join us since the character generation session, and he’s currently considering a Sorcerer for his character.

I’ll post more about these characters, including starting character sheets, once I’ve got Jason’s character in a future blog post.

Under Dark Spires is currently in development. This run-through is meant as a final playtest of a set of adventures that were previously run individually as convention games. As well as making sure there aren’t any places where there are unavoidable Total Pary Kills, I’m also seeing how experience point allocation and levelling up works when the adventures are run together as a campaign.

We are playing again in just under two weeks when we get stuck into an adventure called Blood of the Dragon. 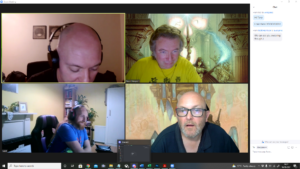 Look, it’s us rolling up characters!