I’m in the final days/weeks of development of OpenQuest 3rd Edition, a task that began in earnest at the end of last summer and was kicked into the high gear due to the success of the 2020 Kickstarter last September.

I’ve just passed the art complete fully laid out layout draft to its editor (Paul Mitchener) and its proofreader, and I anticipate that the pdf will be available to backers in the next couple of weeks, which will allow me to do some form of pre-order. This will include the option to buy the printed version as well as the POD version, which will have endpapers, ribbons and colour plates of all the upcoming OQ 3 supplement covers by Jon Hodgson.

Also the Quickstart rules and Adventure, the Lost Outpost has been passed over for proofing and checking and should be available shortly for people to get their first taste of the game, and its default setting the Empire of Gatan.

Here’s Jonny Gray’s cover for it 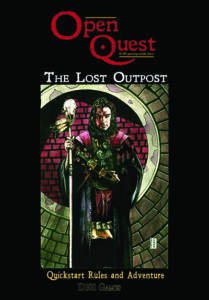 Moreover at OpenQuestRPG.com and more of the moment frequent updates on Twitter using the #OpenQuestRpg tag.