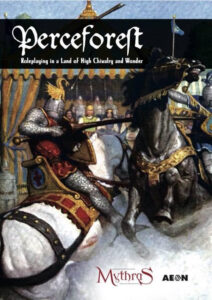 Aeon Games who publish/distribute Mythras here in the UK have put together their own setting for the game, called Perceforest.

It’s available at a 20% discount until the end of the month.

More about it from the promo-email I just received.

Perceforest is a feudal fantasy world of high chivalry and magic. There are evil sorcerers and enchanter-knights, damsels steeped in secret lore and witches weaving spells. The land is strewn with wonders — invisible castles, magical swords, men made of iron, and even fish on horseback!
The saga opens with the Twin Kingdoms ruled by ailing kings and in a state of lawlessness. Take up up the fight against injustice and help to keep the kingdom safe until the king recovers!
AVAILABLE IN 2 WEEKS!