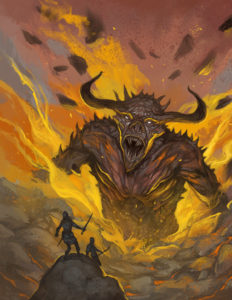 Fires From the Deep cover by Jon Hodgson

Fires from the Deep is a standalone adventure for both OSR and 5th Edition rulesets, by long time D101 contributor Paul Mitchener (OpenQuest/Cruicible of Dragons/Hunters of Alexandria). Its one of three adventures which are up for grabs as part of the Tales from the Sorcerer Under the Mountain Kickstarter, and has already funded. Here’s Paul’s pitch for it.

Currous to know a bit more beyond the basic descriptoin of the adventure? Me too, so I asked Paul five quick questions about it.

Q1. What influences are you drawing on for this adventure?

What I think of as “classic D&D” along with a splashing of Fritz Leiber, a dash of Michael Moorcock, and a touch of Tanith Lee. That should give you the tone.

Q2. Which flavour of FRP do you favour, Old School or New School?

I think I’m a hippy, though less so since my haircut. I don’t see the two as opposed; peace and love. I want characters to be important, but I don’t give two hoots about things like character optimisation. I want decisions to matter, and not just tactical decisions. I want exploration and playfulness. I want story to be what comes after the session rather than something pre-planned. When it comes down to it, I guess that’s sounding pretty old school.

Q3. Your description hints at something more, than the quest for the implied magic item that has come from below. Can you throw any light on this?

The “magic item” is not just an McGuffin- it’s the soul of the adventure. And not just in a “ooh, what a cool gizmo, and everyone wants it” way. Though everyone *does* as it happens, want it, without really knowing what it is.

Q4. What twists and turns does the adventure throw at the players ?

Spoilers! Seriously though, the characters won’t be alone in their pursuit of what came from below, and might have to fight even to get the job. As well as expected and unexpected dangers, there’s a moral dilemma at the heart of the adventure, and an open conclusion depending on what the player characters decide to do, not just whether or not they win.

I don’t think the two are exclusive. Actions have consequences, and that’s an important part of my fun. I want adventures about people, not just situations. After all, even in a “standard” dungeon delve, for me things are all about the player characters, and how they react to danger, strangeness, and rewards. Not to mention solving problems creatively. That sounds like Maximum Game Fun to me!
If that sounds fun to you, go back the Tales From the Sorcerer Under the Mountain Kickstarter, where its available as one of the funded stretch goals 🙂