Part 3 of 5 excerpts from the C&T how to run convention games, deals with how to reward the players, both for good play and by encouraging them to have fun.

Bearing in mind what I’ve just said above, encourage and reward players who explore and interact with their characters surroundings and the non-player-characters that they encounter. Reveal interesting secrets.  Most published Crypts and Things adventures have a special section called “Secrets” in adventure locations, which detail the special treats that can be found by inquisitive players. Dull and uninspired play should not serve up any additional information beyond the basics that are obvious to anyone entering the location.

Remember to let the players have fun

No overshadowing their characters with non-player characters. Let them use their abilities and have their moments (even if it seems trivial to you). Make this a priority and big them up. Unlike a home game where the players learn through trial and error what their characters can do, there isn’t time to do that. It needs to be more immediate.

Next part 4: Be the Monster Manager.

From the upcoming Crypts and Things supplement: Tournaments of Madness and Death.

Coming to Kickstarter on April 1st.

Note: While DuckQuest is currently vapourware, Hearts in Glorantha Issue 6 is now out, which uses this cover and contains the RuneQuest 2 scenario Duck Hill. Part 2 of 5 excerpts from Dark, Delicious and Deadly, an article about running Crypts and Things at conventions.

You can Never Have Enough Pace

(as my mate Evil Gaz says).

This is the primary principle to bear in mind when running a convention game. To keep your players entertained you should help to keep the game moving along at quite a speed. Characters should be jumping, running and occasionally fighting their way through the adventure, each location building on the excitement until the big thrilling finale.

If the action drags, something happens

Things that drag the action, which might be acceptable in a home game where you have all the time in the world, need to be quickly moved on from.

For example, there’s a Locked door that blocks the characters’ way. In a home game, you might let all the table of players try something to open the door. The Thief goes through all their abilities; checking for traps, picking the lock etc. Then the magician casts Detect Magic (“is the door magically locked?”), the Fighter uses their strength to force the door, then everybody else follows on because they can all try to bash the door down. Finally, the players extract as much information from the Crypt Keeper, small details such as moss around the door frame, become excruciatingly important (“I lick the moss, to see if it is poisonous or magical.”)

You’ve not got time for this is in a con game. Let one character have a go at unlocking the door. If they fail, a guard (or a passing patrol of guards if the door has nothing behind it) opens the door from the other side to see who is making that noise and play proceeds.

Don’t be afraid to slow the pace

With all this talk about speed, if you or your players are finding it too much, put the breaks on. Slow the pace. Gently put the player characters in a safe place, slow things down to talk to an NPC for example. Let everybody get their breath back and then get back into it.

There’s a time and a place for investigation

I’ll say it up front C&T is not an investigative game. There may be moments where the players have to find secret entrances, talk to an NPC and ask right questions to find out where they are going next, but these are usually quickly sorted out and moved on from. Characters in Crypts and Things, tend to be men and women of action, and the character classes empathise this.

From the upcoming Tournaments of Madness and Death for Crypts and Things (and other old-school class/level based games). 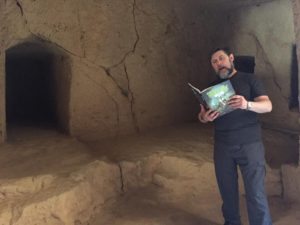 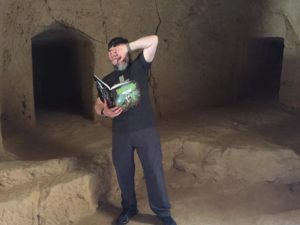 My eyes it burns my eyes! 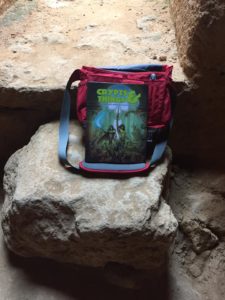 The blasphemous tome itself 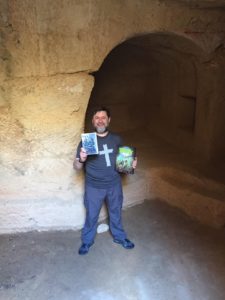 What’s that you got there Jules? 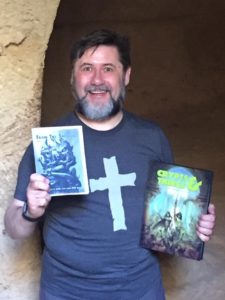 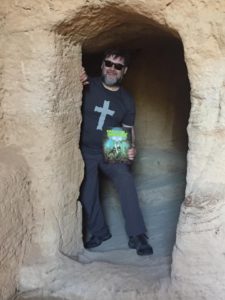 This time he’s mixing up the Cthulhu Mythos with early TSR modules. To quote the man himself:

It pays homage to early 1st edition modules such as Sinister Secret of the Saltmarsh and Against the Cult of the Reptile God. It also draws inspiration from 1980s  adventures as featured in Tortured Souls, Imagine and White Dwarf Magazine, as well as the Call of Cthulhu novella and other Lovecraftian tales

I’ve yet to dip my toe in 5th Ed properly, but I find John’s adventures, with their distinctive  Jonny Gray art more inspiring than the official WoTC offerings.

He’s got a good clear funding model and delivers quality every time. So I’m in again. The Shadow Over Dunsmore Point by Jonny Gray

For the next five Fiendish Fridays, I shall be posting excerpts from “Dark, Delicious and Deadly” an article I’ve written for the upcoming Tournaments of Madness and Death adventure book for Crypts and Things (eta May?).  This article deals with how I write and present one-shot adventures for conventions.

So without further ado here’s part 1.

Focus on what makes Crypts and Things what it is

This is a big one. If you don’t focus on what C&T does, you might as well be playing one of the other variants of the World’s Favourite Fantasy Roleplaying game. Don’t let the fact that it has many features and troupes of that great Dungeon Crawling Game; Classes and Levels, the six characteristics, experience points and hit points are all there merely to make players and Crypt Keepers feel comfortable and at ease. The familiarity of some aspects of the rules is there to ease the players and Crypt Keepers into the game, rather than dropping them in from a considerable height with a huge learning curve. There’s also a delightful simplicity of the old school rules that makes them easy to build upon.

A lot of what C&T does is through tone and emphasis. The text of the game imparts this, but the extra layer of rules (Sanity, Black/Grey/White Magic, Corruption, Skill use and the abilities of the classes) highlights it too.

The big four points of what makes C&T special are: