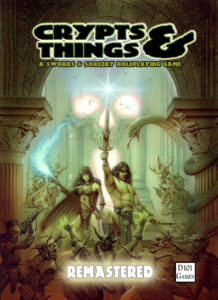 Crypts and Things Remastered is nearly finished with, and is currently having its final check. Its estimated general release date is early October. This deal is for you if you want early access to the game and missed the Kickstarter last year. As a thank you for pre-ordering I’m throwing in a free copy of the first adventure module of the game, Blood of the Dragon. You will also make a saving on the final cost of the book since I’m offering this pre-order on the favourable prices I gave Kickstarter backers (see notes below for details)

More information about this Remastered version game, which has one hundred extra pages and completely new art, can be found here:

I’m nearly done checking for errors on the final draft layout of Crypts and Things Remastered. In a couple of days the pdf goes out to backers while my proofers cast their eyes over it one last time. I’m expecting the book to go on general release later this month or early in September.

The difference between the 1st edition and Remastered is nicely summed up by these two posters, that I did as a bit of fun 🙂

In 2011 when I was developing the game and getting ready to crowdfund its first release via IndieGoGo.com And now as I prepare to release the Remastered edition in 2016.